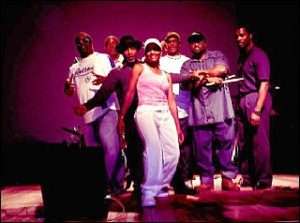 Listen to the Front Ro Band

The Frontro band has been in Omaha since 1993 layin’ down the funk. Formed of musicians who’ve played in various bands around Omaha, Frontro brings it live. Some cover and some originals.

Front Ro is the brainchild of Lester Vaughn and Jerry “Leo” Valentine. Both were former members of Brass, Rhythm, and Funk, the 1979 winner of “The Battle of the Bands” and opening act for the Cameo concert that same year. In 1993 these two brothers decided to “bring back the funk” and formed Front Ro. Through many personnel changes and much hard work the band has become a musical force in Omaha area.