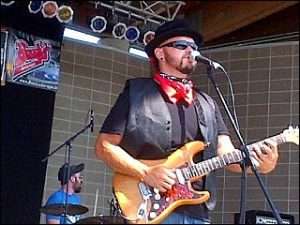 Hector Anchondo
Hector Anchondo was born just right of the Great Plains in Omaha, Nebraska and raised in the hills of the Ozark Mountains near Salem, Missouri where the verdant grassy hills and trees stretched for miles, this Missouri farm boy has been rapidly emerging as one of the mid-western blues artists to watch for. His influences range from Stevie Ray Vaughn and John Lee Hooker to the stories told by legendary country players like Hank Williams Sr. and Johnny Cash.

He’s been writing and performing since he picked up his first guitar when he was sixteen, playing shows for family, friends, pageants, premier concert halls, festivals, live radio, and live television. After graduating high school he moved back to Omaha to pursue his career and in 2000 he started the band Anchondo, named his namesake. With his band he toured the country playing thousands of shows and also putting out four albums and an EP. Hector also performed many times in the prestigious South By Southwest music festival, as well as, several times on the Vans Warped Tour. Hector is living out his love of music with the Blues.